Because 23cm ATV is easy to receive on a normal satellite TV receiver, next thing to do was building an ATV transmitter. Lex, PE1CVJ, has developed a PCB with an 1200 MHz VCO and Video emphasis on it which is working perfect. Output is about 15 dBm. Testing with that module gives a very nice picture. He developed a 2W amplifier as well.
Later on I build a 20W power amplifier with a 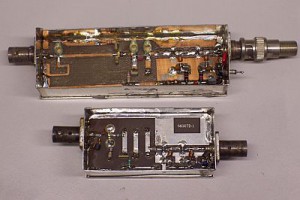 This page is still under construction..